Wadia group owned Go First plans to hit the public markets by the end of June or early July.


The airline which had got approval from market regulator Sebi for its IPO last year had held back its IPO first due to the emergence of Omicron and then to avoid a clash with the mega IPO of Life Insurance Corporation (LIC).


Sources said that the management of Go First is preparing to restart the road shows and investor presentation. “Given the feedback from bankers, we are ready for an IPO,” a person aware of the airline’s plans said, adding that the company will not reduce the issue size.


The airline plans to garner up to Rs 3,600 crore through sale of shares, according to the Draft Red Herring Prospectus (DRHP) plans to utilise a primary portion towards prepayment or scheduled repayment of all or a portion of certain outstanding borrowings, vendors, and aircraft lessors.


Industry sources said that a buoyancy in domestic traffic has encouraged the merchant bankers of the company to relook at the IPO. This is despite heightened challenges of record high fuel prices and a weaker rupee against the dollar which can hit valuations of an airline IPO.


“You can never bet on a peak market or all things going right for an IPO. Merchant bankers were waiting for IPOs of LIC and Delhivery. Bankers are quite eager and optimistic. “We are all prepared and we would be open for the listing as soon as possible,” the person said.


As part of its listing preparation, the airline has resumed its capacity expansion plans and plans to add new aircraft starting from August. It plans to add 10 new Airbus A320 Neos by the end of March 2023.


Go First is flying more as the demand in the domestic sector has improved significantly due to the fall in the number of COVID cases. The airline is operating around 300 flights daily as compared to 288 flights in 2019. 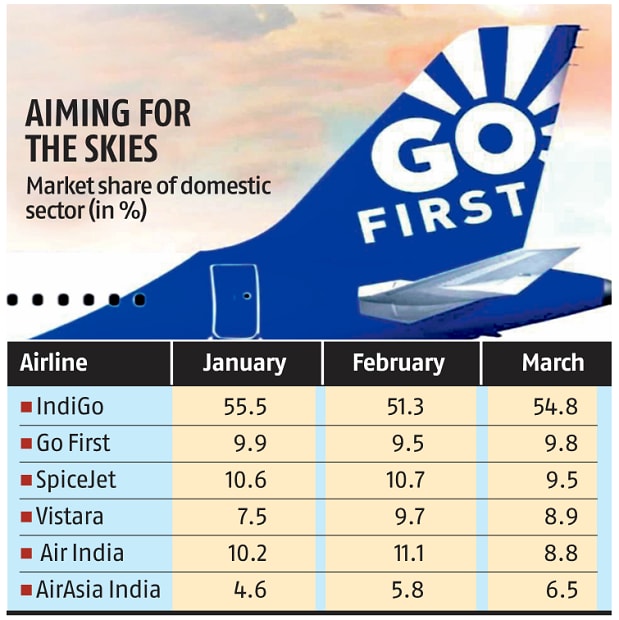 “The buoyancy of traffic has definitely picked up. May has been better than April in terms of booking and advance booking has also become stronger. The top line and occupancy looks encouraging. We still expect around 10-15 percent increase in demand,” a senior executive of the airline said.


However, the airline is yet to return all its current fleet. Out of 56 aircraft, the aircraft is using around 45 with nine A320Neo still parked. “We have 10 more aircraft to be deployed. All aircraft are expected to be operating by the end of June,” the executive said.


Go First is looking to pitch to investors that with the backing of a strong promoter group, the airline can emerge as a No 2 in the Indian domestic market but with a cost structure which is lesser than market leader IndiGo. The financial distress of SpiceJet which has hampered its fleet induction plans allowing Go First to climb to the second spot with a market share of 9.8 percent in March- slightly higher than 9.5 percent of SpiceJet.


“If we don’t aggregate the four Tata group airlines which are functioning as separate entities as of now, the airline has been second in the pecking order with a consistent market share of around 10 percent. Even in the month of May, till date average market share of Go First has been little less than 12 percent,” a senior executive of the airline said.


The increase in market share of Go First, the executive said is also a factor of increase in utilisation, deployment of aircraft and selection of network. Currently the fleet utilisation is at around 13.2 hours and the airline intends to increase it further.


The airline has consciously decided not to spread its network thin but increase its strength where it operates. Almost with similar market share the airline operates to 29 destinations as compared to 72 destinations of SpiceJet. “We try to remain at a meaningful scale where we are present and give more options to customers rather than spreading thin and wide,” the executive said.


Ameya Joshi, founder of aviation blog Network Thoughts said that if The Tata group decides to merge Air India with AirAsia India it will be a clear number two. “There have been three different airlines in the first three months of 2022. Market share is also a function of capacity and airlines except IndiGo have been cautious in adding capacity. In the current cost environment, the one who is willing to sustain capacity will grab the second place,” he said.