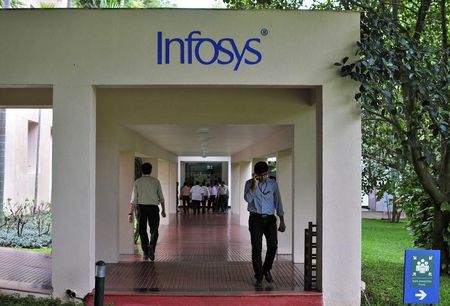 Analysts peg more pain ahead for the Indian IT companies amid a likely slowdown in revenue growth of the US dollar, thanks to the existing macroeconomic stress.

The Bengaluru-based IT scrip has declined 14% in the past month and tanked almost 27% so far in 2022.

The US Fed hiked its by 75 basis points for the third consecutive time on Sept 21 and gave a hawkish outlook for future monetary tightening to curb the soaring inflation.

As a result, the Indian equities traded in the red with headline indices tanking 0.82% and losing 462.9 points or 0.78% at the time of writing. Sectoral index trading 0.1% lower, with Coforge (NS:) surging the most and Wipro (NS:) falling the most.

Global brokerage Goldman Sachs (NYSE:) downgraded its rating on Infosys from ‘Buy’ to ‘Sell’ last week, stating that it remained more optimistic on the EBIT margin estimations of Indian IT companies than their revenue prospects.

“Given the upcoming macro slowdown (not recession) our macro team expects, which is percolating down multiple leading demand indicators, we believe Indian IT sector USD revenue growth will start to materially slow down from here,” stated the brokerage.