September 14th 2021 @ 3:34 PM
Market closed ; Markets fail to sustain opening rise
Domestic equity benchmarks started Tuesday's session on a strong note amid buying interest in RIL and private bank stocks. However, the markets failed to maintain the opening gains on account of selective profit-taking. At close, the Sensex was at 58,247 level, up around 69-odd points. The NSE Nifty gained 24-odd points to end at 17,379. The broader markets continued to outperform the benchmarks. The BSE Midcap 100 closed the day 1.09% higher, while the BSE Smallcap 100 ended up 0.63%.

September 14th 2021 @ 3:24 PM
Laurus Labs, Unitaid and Clinton Health Access Initiative in pact for HIV medication development for children
Unitaid and CHAI are working with the company to ensure children living with HIV/AIDS have access to high-quality second- and third-line HIV treatment 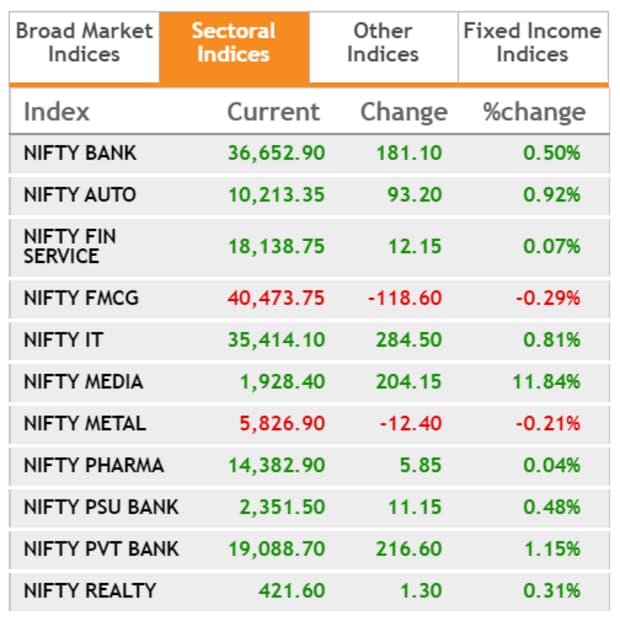 September 14th 2021 @ 2:24 PM
Indian stocks outpacing world by most since 2018 emboldens bulls
Indian stocks are throwing up rare signals pointing to the possibility of further gains after a powerful rally. The MSCI India index beat the MSCI World gauge of developed nations by more than six percentage points last month, the biggest gap since 2018. The average return from the India gauge 12 months out after such relative outperformance is 15%, according to data compiled by Bloomberg.

September 14th 2021 @ 1:05 PM
This Rakesh Jhunjhunwala-owned stock hits record high; up to 30% in 3-weeks
Shares of Nazara Technologies hit a record high of RS2,076, and have rallied 8 per cent on the BSE in intra-day trade on Tuesday, surging 16 per cent in past two trading days. In the process, the stock of information technology (IT) software products company surpassed its previous high of RS 2,026.90 touched on debut day i.e. March 30, 2021 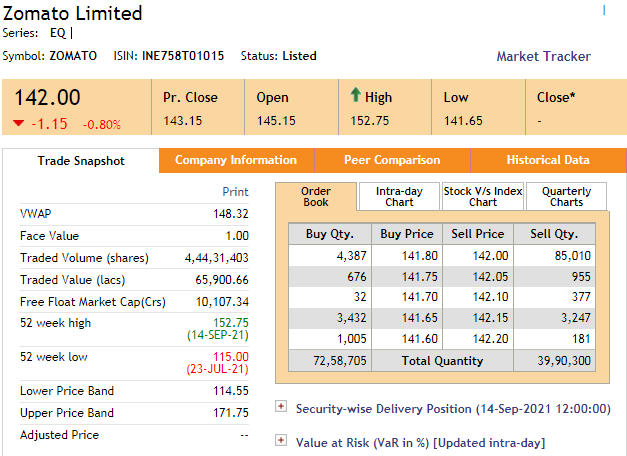 September 14th 2021 @ 12:57 PM
Suryoday Small Finance Bank jumps 12% on merger buzz with Clix Group
Bank clarified it was unable to comment on media speculation and rumours and it would be inappropriate to do so

September 14th 2021 @ 11:52 AM
Union Bank of India inks its first sustainability-linked overseas loan
State-owned Union Bank of India through its international banking division on Tuesday announced that it has secured a sustainability-linked loan aggregating to total syndicated facility of $1.5 billion with one of the leading trading corporates globally. Under the facility, Union Bank of India will include three key performance indicators (KPIs) relating to a reduction in greenhouse gas emissions, responsible sourcing of metals and growing renewable power portfolio. The sustainability-linked KPIs will have to be tested annually and verified by a third-party expert. Under this structure, the interest rate paid by the borrower on the credit facilities will decrease or increase based on the group’s progress on three key performance indicators (KPIs), the bank said in a statement. September 14th 2021 @ 11:26 AM
Kotak Mahindra Bank rises by 1% in trade
The bank had cut its home loan interest rates by 15 basis points to 6.50% per annum
This special rate is for a limited period beginning September 10 and ending November 8 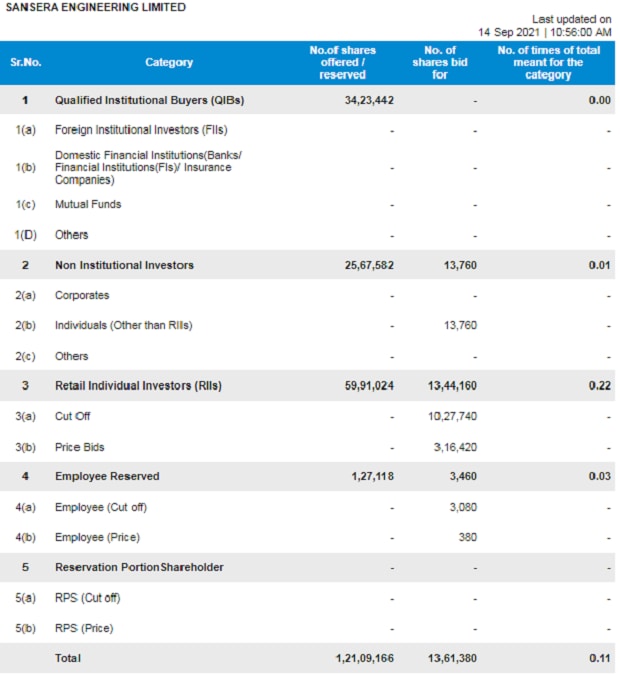 September 14th 2021 @ 11:03 AM
European steel to miss climate goals without technology shift
Europe’s steel industry must shift to low-carbon technologies from coal-fired blast furnaces within 12 years to prevent global warming exceeding the targets set by the Paris Agreement on climate change. New or refurbished blast furnaces have a lifespan of as long as two decades, highlighting the risk of long-term climate impacts if the switch isn’t made by 2033, according to a report from research house Industry Tracker. By contrast, many of the region’s steelmakers lack long-term plans to reduce emissions, it said. The steel industry worldwide is responsible for about 7% of global carbon emissions. Without action, Europe’s steelmakers would exhaust their carbon budget -- the amount they can emit before compromising Paris climate change goals -- by 2035, Industry Tracker said.

September 14th 2021 @ 11:02 AM
Cabinet to take up incentives for the auto industry on Wednesday
The Union cabinet is likely to consider a production linked incentive (PLI) scheme for specific segments in the automobile sector on Wednesday, a person familiar with the development said. This will be part of the overall PLI schemes for 13 sectors announced by the government in the Union Budget 2021-22, with an outlay of Rs1.97 lakh crore. Prepared by the ministry of heavy industries, the latest scheme will cover automobiles and auto components, the person said.

September 14th 2021 @ 11:00 AM
Indian stocks outpacing the world by most since 2018 encourages bulls
Indian stocks are throwing up rare signals pointing to the possibility of further gains after a powerful rally. The MSCI India index beat the MSCI World gauge of developed nations by more than six percentage points last month, the biggest gap since 2018. The average return from the India gauge 12 months out after such relative outperformance is 15%, according to data compiled by Bloomberg.

September 14th 2021 @ 10:56 AM
Kesoram rights offer to open on Sep 27
BK Birla Group flagship Kesoram Industries on Monday said it will launch a rights issue of over 7.99 crore equity shares on September 27 to raise up to Rs 399.99 crore. It fixed the rights entitlement ratio of 133 for every 274 equity shares held by eligible shareholders of the company as on the record date.

September 14th 2021 @ 10:56 AM
Ami Organics makes a strong debut, shares list at 48% premium
Specialty chemicals company Ami Organics made a strong debut on the bourses, listing at a 48 percent premium against its IPO price of RS 610 a share on September 14. On the BSE, the stock debuted at RS 902, up 47.87 percent, while it opened 49.18 percent higher at RS910 on the National Stock Exchange. The listing was better than analysts' expectations following a strong response the public offer. The initial public offering  (IPO) was subscribed 64.54 times during September 1-3, 2021, as investors bid for 42.22 crore shares against the offer size of 65.42 lakh shares.

September 14th 2021 @ 10:50 AM
Jet Airways to have over 100 aircraft in 5 years
Jet Airways will resume operations in the first quarter of 2022 and have over hundred aircraft in 5 years, the Kalrock-Jalan consortium said in a statement on Monday. The airline will be headquartered in Delhi and operate its first flight on the Delhi-Mumbai route, it added.

September 14th 2021 @ 10:25 AM
Ami Organics lists at 49% premium over issue price
Shares of Ami Organics Ltd made a stellar debut on Tuesday. The stock was listed at ₹910, a 49.18% % premium over its issue price of ₹610 a piece on the NSE. During its share sale, the issue worth ₹569.64 crore was subscribed 64.54 times. The company is well placed to tap opportunity in the fast growing specialty chemical market by leveraging its strong R&D and expanding product portfolio, said Sneha Poddar, research analyst, Motilal Oswal Financial Services Ltd. Poddar thinks that the issue is reasonably valued at 41.2 times FY21 price to earnings on post issue basis, while it enjoys higher growth.

September 14th 2021 @ 10:23 AM
Gravita India's step-down arm starts aluminium recycling unit in Mozambique:
Gravita informed that a step down subsidiary of the company situated in Mozambique, East Africa has started commercial production of aluminium from its new recycling plant having an annual capacity of around 4,000 MTPA in addition to its existing lead recycling facility of 4,500 MTPA and is also in process of setting up of a new plastic recycling unit in Mozambique. The company is expecting an additional revenue of approximately Rs 50 crore per annum coupled with gross margins of around 18% from this aluminium recycling plant. The stock was trading at Rs 204.90, up Rs 1.30, or 0.64 percent. It has touched an intraday high of Rs 211.60 and an intraday low of Rs 204.40.

September 14th 2021 @ 10:18 AM
Escorts signs MoU with IndusInd Bank for financial offerings to customers:
Escorts Limited (Agri Machinery) has reinforced its relationship with IndusInd Bank with a formal Memorandum of Understanding that will pave the way for both companies to provide one of the best financial offerings to its customers. Escorts and IndusInd Bank will work together closely in understanding the financial needs of its customers and will jointly come up with various financial programs to enable customers invest in modern farm machinery to enhance their farm productivity and income, the company said in an exchange filing. The stock was trading at Rs 1,409.80, up Rs 31.55, or 2.29 percent. It has touched an intraday high of Rs 1,411.00 and an intraday low of Rs 1,377.80.

September 14th 2021 @ 10:08 AM
Sensex jumps 400 points in pre-open market; Nifty nears 17,500
: After a tepid start to the week, the markets are likely to open on a positive note this morning mirroring the global cues and lower inflation (CPI) numbers back home. On Monday, the markets languished in red, but recouped losses in the second half of the day. The Sensex eventually ended 127 points lower at 58,175, and the Nifty slipped 14 points to 17,355. The US markets ended mostly in green on Monday amid sector specific buying action. The Dow Jones gained 0.76 per cent and the S&P 500 index was up 0.2 per cent. The Nasdaq, however, ended a tad in red, down 0.1 per cent. Tonight, the US markets will look for cues from the Core CPI data. Among the Asian peers – Japan’s Nikkei is up nearly a per cent, and Straits Time is up 0.3 per cent. On the other hand, Hang Seng and Shanghai Composite have slipped in early trade, down over 0.5 per cent each. At 08:10 am, the SGX Nifty had gained 45 points at 17,407, thus indicating a positive opening for our markets

September 14th 2021 @ 9:57 AM
HCL Technologies up over 1.5% after it signed pact with South Korean company HANCOM for tech solutions

All sectoral indices barring FMCG are trading in the green with the midcap and small cap indices adding over half a percent each.

September 14th 2021 @ 9:19 AM
Sensex, Nifty trade in the green at pre-opening market; Zee Entertainment in focus


September 14th 2021 @ 9:15 AM
Good Morning
Good morning and welcome to Profitsheets live market updates from the market in India. Track all the latest market related updates her

L&T Tech plunges 8%; has this multibagger's rally run out of steam?

Stocks that moved the most on January 18 : Gainers & Losers

Government set to become largest shareholder of Vi, to own 35.8% stake